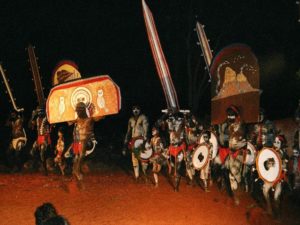 Mowanjum Raindance – Elders Vision So The Children Can Dream

“The elders must have a Vision … so the children can dream” ….. David Mowaljarlai AOM

Mowaljarlais Vision included to bring the Wandjina spirit to Sydney for the Olympic Games, to share it with the World …. Wandjina emerged in the opening ceremony as sacred ground was re-created through song and dance, and Cathy Freeman ignited the ancient flame in our heart.

The Ngarinyin, Wandjina people of the Kimberley, have a particular vision for themselves and Australia. Reflecting their philosophy, they see their future as a co-cultural one; a relationship between white Australia culture and Ngarinyin culture where the two Laws walk side by side in a relationship of cooperation, sharing and mutual benefit. A synergy of interactivity between the two cultures.

Ngarinyin, Wandjina people of the Kimberley

Nation Dance Nation Dance Australia 1 December 2019 Media Statement For centuries Aboriginal people have danced on the land of Australia for all purposes of sacred ceremonies. In turning the pages in history of Aboriginal people and their culture is that it is ancient and is filled with over 400+ Nations and 200+ languages spoken. This unique web of design across the whole continent is manifested with many songs and dances that tell stories of who we are and where we come from. It gives us our identity.…

Australia Will Become A Model For Other Global Communities

Australia will become a model for other global communities ... I see Australians coming together…

Recent Posts
© 2019 One Day Vision
0
%d bloggers like this:
We use cookies to ensure that we give you the best experience on our website. If you continue to use this site we will assume that you are happy with it.Ok